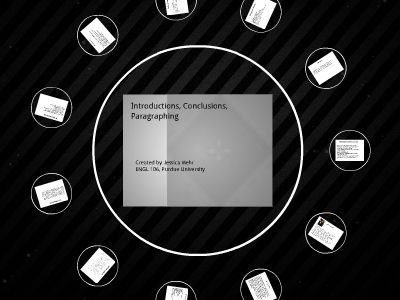 Introductions, Conclusions, Paragraphing
Created by Jessica MehrENGL 106, Purdue University
Paragraphs make promises
Focus on one main point and don’t meander.Make it very clear what the paragraph is “about.” Don’t make your reader work for it.Use an explicit topic sentence (doesn’t necessarily have to be sentence 1).Keep it a digestible length.Aim for logical, not artificial transitions between paragraphs (coherence).Write your sentencescohesively, moving from old information to new. (Course Packet page 182)
Law & order
Arguments, like court cases, are often won and lost based on the first and last thing the audience hears. In the courtroom, each lawyer always begins with an opening statement that grabs the jury’s attention and previews their argument. After all the testimony and facts are presented, they then reinforce their arguments with a closing statement that is not just a rehash of what is already known.
Law & order
The prosecutor, Jack McCoy, often brings up the repercussions this case will have on the criminal justice system, or reminds the jury of their responsibilities as citizens. He strives to end the case on something that resonates, a quote or snappy line, a last minute appeal to the jury’s logic or emotions. In your papers, introductions and conclusions work in much the same way, complementing each other while not being overly repetitious.
strong introductions
Grab the reader’s attentionA quotationA vivid imageAnecdoteHard-hittingstatisticGetto the topic quicklyPreviewthesis / argumentBroad statementDetailed synopsisQuestionEstablishcredibility (ethos)Speak with authorityWrite clear, focused, well-proofreadsentencesDon’t have to be written first!
Episode premise
A bounty hunter namedBobCatRavelliis found murdered in a sleazy hotel room in NYC. The last call on his cell phone was to a journalist named Brian Kellogg. Kellogg had recently conducted a high-profile interview with a fugitive named Mitchell Moss, a rich rapist who jumped bail. Everyone is looking for Moss, includingBobCatRavelli, who was trying to bring him in. Kellogg (the journalist) claims thatBobCatcalled him to get a lead on the suspect’s location, but, as he told the FBI, he doesn’t know where Moss is and can’t discuss anything regarding their conversation due to the journalist shield law.
Episode premise
They consider Moss a suspect in the bounty hunter’s murder, and start digging into Kellogg’s interview in an effort to find him. They discover that the interview was completely fabricated and that when it was published, Bobcat, who’d been tracking Moss for a year, immediately saw discrepancies and new it was a fake. He came to New York looking to blackmail Kellogg, and Kellogg killed him then covered it up by staging the crime scene to make it look like the work of a prostitute.
Opening statement
As we view the example opening statements fromLaw & Order, notice how each lawyer:Grabs our attention(Which attention-grabbing strategy does each lawyer use?)Gets to the point quickly.Previews their argumentAppeals to logos, pathos, and ethos
Prosecutor
Starts with avivid imagethat establishes sympathy (pathos) for the victim.Appeals to our sense of logic by pointing out that this was not a heat of the moment crime, but carefully planned and executed.Establishes his own credibility by speaking articulately and with authority.
Defense attorney
Starts with ananecdote.Establishes pathos for the defendant by making him seem like the victim.Establishes his ethos with humor that wins over the jury.
Strong conclusions
Touchback on main pointsReconcile two stancesEnd on something that resonatesMake a last-minute appeal to pathos orlogos.Discuss the larger ramifications of thisargument.Raise another compelling question for the reader toponder.Look towards thefuture.
exercise
In groups, write a closing statement for either the prosecution or the defense. Follow the strategies of what makes a good conclusion.