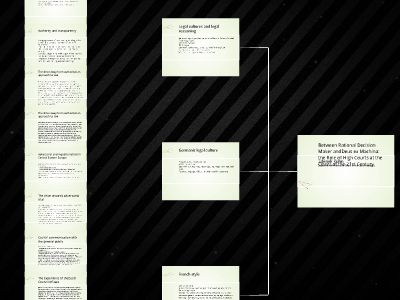 Development of Czech case law after the fall of communism

Between Rational Decision Maker andDeus ex Machina: the Role of High Courts at the Onset of the 21st Century
Zdenek KühnSupreme Administrative Court of the Czech Republic
Legal cultures and legal reasoning
Germanic legal style (most countries of Central Eastern Europe)French legal styleCommon law styleNordic styleCommon trends:constitutionalizationof “ordinary”lawCourts’ communication with the partiesWith the public in general (beyond the parties)
Germanic legal culture
Frequent quotation of case lawScholarly literatureDecisions relatively long, they are getting longer than they used to beTechnical language, difficult to understand for lay people
French style
Shorter opinionsQuotation to case law missing or much less frequent than in German legal styleX Other instruments making opinions of high courts rational: advocates general, extensive case notes by the legal academiaWarning: the French style shall not be confused with a defunct imitation of the German style
Common law style
Very detailed, less formal languagemuch less technical language than opinions produced by continental judgesConcurring and dissenting opinions in higher courts
Authority and transparency
Changing concept of the authority including judicial authority in Europe at the onset of the Third MillenniumThe trust in the institution itself X the trust in the institution subject to the fact that it justifies its activityExample: judges in the Middle Ages did not need to justify their opinion, the correctness of their judgments flowing from the fact that through their mouths it was the King who was speaking
The drive away from authoritarian approach to law
The authoritarian approach to law, combined with formalist textual positivism, accords to the judge the exclusive role in constructing the meaning of the law. It is so because (1) the application of law is conceptually viewed as the resolution of easy cases by the court, which does not, in that process, require the assistance of either party (formalist aspect) and (2) the construction of the law is the result of a top-down process, where parties are the addressees of the result of construction rather than direct or indirect participants on that construction (authoritarian aspect)
The drive away from authoritarian approach to law
The judicial discourse ofanylegal system is inherentlyauthoritative. This is a result of the fact 1) that by definition courts must decide as if there were one correct answer to the questions presented to the court (the judicial ‘one right answer’ thesis), and 2) that judicial decisions are final because of their authority within the judicial and legal system.Authoritativejudicial discourse does not preclude, but on the contrary presupposes,apluralityof opinions and the participation of all competent persons in the legal decision-making process. Plurality of opinion and the fact that the court takes all relevant opinions seriously gives to the decision-maker of last resort the legitimacy to provide the ‘right’ answer, which is a necessary condition of the discourse to remain authoritative
Adversarial and inquisitorialtrial in Central Eastern Europe
adversarial European and inquisitorialsocialist eratrial – basic differencesDifferent conceptions oftruthDifferentconceptions of the values and interests behind trialthe drive towards adversarial (contradictory) trial in last twenty years, guidelines provided by the European Court of HumanRightsHave impact onthe courts’ communication with the parties
The drive towards adversarial trial
Lobo Machado v. Portugal, Grand Chamber 20 February 1996, no. 15764/89, § 31Theduty of the judge to inform the parties about anything which is happening in the trial; beyond mere equality of partiesThe right to adversarial proceedings (Art. 6 of European Convention) „means in principle the opportunity for the parties to a criminal or civil trial to have knowledge of and comment on all evidence adduced or observations filed, even by an independent member of the national legal service, with a view to influencing the court’s decision”
Courts’ communication with the general public
Via the courts’ websitesDevelopment in the course of the 1990s (case law, names and pictures of judges etc.)Social networks–Twitter, Facebook, Google +Traditional approach–the court speaks only via its website (Latvia, the Czech Republic with respect of both supreme courts, Ireland, Belgium, Austria)The use of social media networks–RaadvanStatein the Netherlands (Twitter–over 11 000 followers,Facebook,LinkedIn), the Czech Constitutional Court (Twitter–2200 followers and Facebook), Austrian Constitutional Court (Twitter - almost 4 000 followers), FrenchConseild'Etat(only Twitter–almost 100 000 followers), Estonian Supreme Court on behalf of the entire judiciary (Facebook andYoutube), EU Court of Justice (Twitter–25 000 followers) etc.
The Experience of theDutch Council ofState
[The use of the]website is very limited, since people do not regularly check your website for news. And if they do, it’s mostly people who are already professionally interested in our judgments and advisory opinions. We find that we attract a bigger and more diverse crowd by using Twitter to get our press releases and summaries of advisory opinions across. It takes up a bit of time, however it’s not that time-consuming as people might think. And, a very big advantage is that we find it also a very useful way to get information (instead of using it only as a way to send information) when the Council of State is mentioned in (internet)news, blogs and twitter accounts of other people. The only downside is that Twitter is unlimited, so you are bound to get also a lot of tweets you don’t need, or particularly want to read.Simon Peers, http://www.aca-europe.eu/forum/viewtopic.php?f=3&t=247