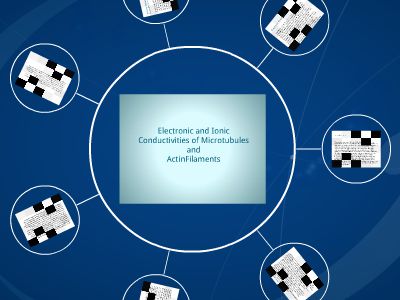 Electronic and Ionic Conductivities of Microtubules and ...

Electronic and Ionic Conductivities of Microtubules andActinFilaments
Introduction
Theresearcheldofnanoscalescience and technology has made tremendous progress in the past decades, ranging from the experimental manipulations of single atoms and single molecules to the synthesis and possible applications of carbonnanotubesand semiconductornanowires.On the other hand, as the semiconductor device feature size keeps decreasing, the traditional top-downmicrofabricationswill soon enter the nanometer range, and further continuous downscaling will becomescienticallyand economically challenging. This will motivate researchers around the world to and alternative ways to meet future increasing computing demands. With a goal of examining individual molecules as self-contained functioning electronic components, molecular transport characterization is an active part of the researcheldof nanotechnology. In 1974, a theoretical model of a unimolecularrectierwas proposed, according to which a single molecule consisting of an electron donor region and an electron acceptor region separated by a bridge would behave as a unimolecular p-n junction.
Apublication in 1997 reported an observation of such a unimolecularrecticationin a device containing Langmuir Blodgett (L-B)lms; however, it is not clear if the observed rectifying behavior had the same mechanism since it was just shown in a single current-voltage measurement. In the meantime, instead of using L-Blms, others proposed to exploit self-assembled conjugatedoligomersas the active electronic componentsandstarted the electrical characterization ofmonolayersformed by the molecular self-assembly technique.Molecular self-assembly is an experimental approach to spontaneously forming highly orderedmonolayerson various substrate surfaces.Earlier research in this area includes the pioneering study of alkyldisuldemonolayersformed on goldsurfaces.This researcheldhas grown enormously in the past two decades and self-assembledmonolayers(SAMs) have found their modern-day applications in various areas, such asnanoelectronics, surface engineering,biosensoring, etc.
Varioustest structures have been developed in order to carry out characterizations of self-assembled molecules, and numerous reports have been published in the past several years on the transport characteristics.Nevertheless, many of them have drawn conclusions on transport mechanisms without performing detailed temperature-dependentstudies,and some of the molecular effects were shown to be due tolamentaryconduction in furtherinvestigations,highlighting the need to institute reliable controls and methods to validate true moleculartransport.A related problem is the characterization of molecules in the active device structure, including their conguration, bonding, and even their very presence. In this research work, we conduct electrical characterization of molecular assemblies that exhibit understood classical transport behavior and can be used as a control for eliminating or understanding fabrication variables.
Amolecular system whose structure and congurationare well-characterized such that it can serve as a standard is the extensively studiedalkanethiol[CH3 (CH2 )n 1 SH] self-assembledmonolayer.This system forms a single vanderWaals crystal on the Au(111)surfaceand presents a simple classical metal insulator metal (MIM) tunnel junction when fabricated between metallic contacts because of the large HOMO LUMO gap (HOMO: highest occupied molecular orbital; LUMO: lowest unoccupied molecular orbital) of approximately 8eV.Utilizing a nanometer scale device structure that incorporatesalkanethiolSAMs, we demonstrate devices that allow temperature-dependent I(V) [I(V,T)] and structure-dependentmeasurements.The obtained characteristics are further compared with calculations from accepted theoretical models of MIM tunneling, and important transport parameters arederived.
The obtained characteristics are further compared with calculations from accepted theoretical models of MIM tunneling, and important transport parameters arederived.Electronic transport throughalkanethiolSAM is further investigated with the technique of inelastic electron tunneling spectroscopy (IETS).IETS was developed in the 1960s as a powerful spectroscopic tool to study thevibrationalspectra of organic molecules connedinside metal oxidemetaltunnel junctions
In our study, IETS is utilized for the purpose of moleculeidentication, and the investigation of chemical bonding and the conduction mechanism of the control SAM. The exclusive presence of well-known characteristicvibrationalmodes of thealkanemolecules used is direct evidence of the molecules in the device structure, which is therstunambiguous proof of such an occurrence. The spectral lines also yield intrinsiclinewidthsthat may give insight into molecular conformation, and may prove to be a powerful tool in future molecular device characterization.
Electrical Characterization of Self-AssembledMonolayers
Electron Tunneling
Tunnelingis a purely quantum mechanicalbehavior.During the tunneling process, a particle can penetrate through a barrier a classically forbidden region corresponding to negative kinetic energy and transfer from one classically allowed region to another. This happens because the particle also has wave characteristics. Since the development of quantum mechanics, tunneling phenomena have been studied by both theorists and experimentalists on many differentsystems.One of the extensively studied tunneling structures is the metal insulator metal tunnel junction. If two metal electrodes are separated by an insulating lm, and the lm issufcientlythin, current canowbetween the two electrodes by meansoftunneling.The purpose of this insulating lm is to introduce a potential barrier between the metal electrodes.

Make amazing presentation for free
Electronic and Ionic Conductivities of Microtubules and ...