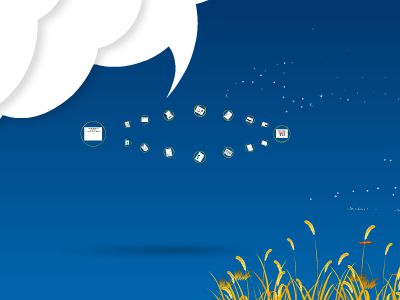 Chemical Bonds of CompoundsConduction of Heat & Electricity
Review of Periodic Table
Compoundswith Ionic Bonds
-One or more electrons are transferred from the atom(s) of the metal to the atom(s) of the non-metal.-When the electron(s)are transferred, theresult is a positiveand a negativespecies calledions
Ions
Are similar to atoms except that the number of protons does not equal the number of electronsThey have a net electric chargeWhen these species come in contact they stick togetherThey dissolve in water which allows these solutions to conduct electricity
Characteristics of Ionic Compounds
When these compounds are dissolved in water, the ions separate back into their individually charged species (dissociation)This separation allows these solutions to conduct electricity.An ionic compound in solution is called andelectrolytic solution(a solution capable of carrying an electric current)
Compounds with Covalent Bonds
- made up of non-metals- electrons are shared- bond is a permanent attachment between the atoms to form a unit- a chemical reaction must occur to separate these atoms back to their elemental form-they do not separate into charged species when dissolved in water, do not conduct electricity

Molecule = an electrically neutral group of atoms held together strongly enough to act as a single particle.
Review Kinds of Bonds
Conductivity of Electricity by Metals
When more electrons are pushed into a piece of metal (by an electric current for example) the electrons just flow through the metal in between the metal atomsCommon metals - copper, silver, aluminum.
Conductivity of Heat by Metals
Ability of Metal to Conduct Heat
One of the properties that defines an element as a metal is its ability to conduct heat and electricityThe reason metals conduct heat so well is that the electrons in them can move around easily, and they can carry heat from one part to another
More SpecificallyHeat Conduction is:
The flow of heat from a hot part of a body to a cooler part,without transfer of matter.Conduction can also take place from one body to another, provided the two bodies are in contact, and a temperature difference exists between them.
For example, a pot on a hot plate is heated by conduction from the stove surface, via the underside of the pot.
How is the heat conducted?
Through its particles that are constantly vibrating or oscillating against each other.Through these collisions, the heat energy is conducted through the length of the piece of metal.The hotter atoms (faster moving) vibrate against slower moving cooler atoms causing them to heat up.
Ability of a metal to conduct heat?
What is an element of metal made of?Atomsthat vibrateFree electronsthat move around
Do all metals have the same ability to conduct heat?
In some metals (copper, gold, silver, aluminum) the electrons can travel past hundreds of atoms before bumping into something that makes them change directions.In others (especially alloys with more than one type of metal atom) the electrons travel only past a few atoms before bouncing off some irregularity in the material.Alloysare basically a mixture of two or more metals - Depending on what element is added, you could create Stainless Steel or Galvanized Steel or carbon-steel alloys are used in armor plating and weapons.
Comparison of Heat Conduction Capability
Percent of Heat Conduction Capacity – Silver = 100%