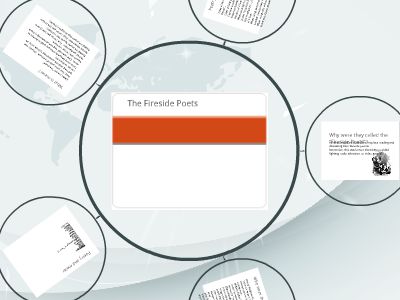 The Fireside Poets
Why were they called the “Fireside Poets”?
Families would sit around the fireplace reading and discussing their favorite poems.Remember, this was before electricity provided lighting, radio, television, or video games.
Who were the Fireside Poets?
Henry Wadsworth Longfellow1stAmerican poet to reach a wide audience and create national interest in poetry. Optimistic and sentimental writing style.William Cullen Bryant1stAmerican poet to win worldwide critical acclaim. Most famous for “Thanatopsis”OliverWendallHolmesA descendent of Anne Bradstreet. Known for his use of exaggeration and colorful expressions.James Russell LowellMost talented of the “Fireside Poets”, but career was disrupted by personal tragedy (three of this four children died).John Greenleaf WhittierBorn in poverty; self-educated. Most politically active of the poets.
Poetry and meter
Iambic
Trochaic
AboveBelowBestowBecauseSedate (change to “fearful”)ObtainPreciseForgetAgoRequireAppriseGwinnett
FatherHeatherCertainWatchingGoingStayingSolidFearfulWatchfulWrittenSpokenChosenGeorgiaBulldog
What is meter?
Meter means “measure”Foot: The basic unit of measure. Usually one stressed and one unstressed syllable (may be iambic or trochaic)Iamb:most frequent measure used in American verse. One stressed and one unstressed syllable equals one iambic measure.Iambic pentameter: Five iambs per line (5 two-footed measures equals ten syllables).Iambic tetrameter: Four iambs per line (4 two-footed measures equals eight syllables).
Poetry and MLA format
Titles of short poems are always in quotations (“The Raven”)Titles of long poems (The Iliad) are always underlined.Cite line numbers, not page numbers.Keep line breaks in tact by using a slash (/) to indicate the end of a line.When quoting 4 or more lines of poetry use a block indent 10 spaces from the left margin.Use an ellipsis (…) if you remove words form the middle of a line.When citing several words or phrases, use a line number immediately after each word or phrase.When citing only one word or phrase, use a line number at the end ofyour sentence.