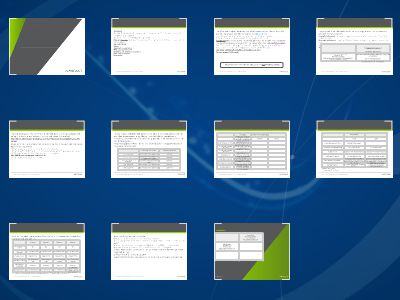 February 21, 2019
2019 Potential and Goals Study Workshop
OverviewThe P&G Study is scoped with developing multiple scenarios of future market potential for energy efficiency programs.Scenarios inform the CPUCs goal setting process.Navigantdoes notmake recommendations on which scenario the CPUC should pick to be the basis for goals.Agenda ItemsScopeApproach to scenariosWhat was done in 2017Variables that influence scenariosDraft 2019 scenariosDiscussion
The 2019 P&G study will develop a total of four scenarios that inform the CPUC’s goal setting process. We refer to these as theP&G Scenarios:One “reference” scenario that stems directly from the calibration processThree additional alternate scenarios (informed by stakeholder input)Additionalscenario analysis will be conducted as part of the Additional Achievable Energy Efficiency (AAEE) analysis after the P&G study is finalized.AAEE Scenarios:Feed into the California Energy Commission’s Integrated Energy Policy Report (IEPR)Are built around the adopted IOU goals and informed by P&G ScenariosConsider additional variables and policy contextDo not impact IOU goals
Today’s discussion focuses onP&G Scenarios,notAAEE Scenarios
Key variables in the P&G model can fall within a range possibilities. Variables are grouped into two categories:Internally Influenced- policies and program decisions that are under control of the CPUC and IOUs collectively,Externally Influenced- those that CPUC and IOUs collectively do not have complete control over.Scenarios allow us to explore different futures based on a combination of assumed policy interventions, program design decisions, and exogenous factors
The Reference Scenario will be primarily informed by current program design and policy. It is meant to best represent “current and known future policy”The three additional scenarios will be finalized in conjunction with CPUCObjective of the alternate scenarios: make sure the results are most useful for policy decision making. As such:P&G scenarios should focus on internally influenced variablesP&G scenarios will fix externally influenced variables to a single setting across all scenarios:CEC Mid-case forecast for retail rates, population, building stockUse DEER and workpaper values as isOne set of assumptions about future C&S
The 2017 P&G Study developed scenarios that were primarily focused around the cost effectiveness screen using different tests and different avoided costsFocus on C-E tests was due to lack of a final GHG adder to be incorporated into the avoided energy costsProgram engagement was either set to a reference case or an aggressive case (in only one of the scenarios)
*Not fully defined by CPUC** Consistent with 2017 P&G Study
*If Alternate 1 results in a portfolio that is not cost effective (TRC less than 1.25), threshold will be moved back to 1.25
This is not intended to be considered final, but an initial proposal for stakeholders to consider and comment on.
Questions for stakeholder to consider:What additional scenarios should be considered and why?Do the majority of scenarios lie within a realistic policy framework under which CPUC could set goals?What can be done to capture the essence of SB350 (doubling EE) within the scenarios?What level of certainty is needed for future C&S to be included in IOU goals?A useful way to submit comments: fill out your own table on slide 9 with your own suggested settingsComments on due: February 28, 2019Access slides and submit comments via the CPUC Public Document Archive (PDA)
navigant.com
contacts