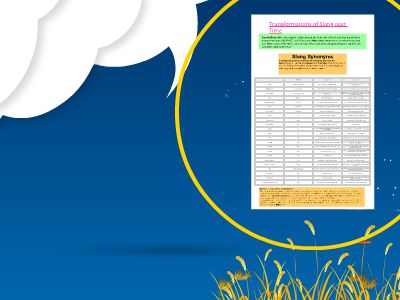 Transformations of Slang over Time
Slang SynonymsIn college slang there are particular wordsthat generate the mostsynonyms, listed below.CompareEble’sfindingsfrom 1972-1993 with our class findings from2008 and 2010. Obviously, a lot haschanged. But have slang words changed much in the past 2 years?!
ConnieEble(1996), who studied college slang at the University of North Carolina, found that in a seven-year span (1980-1987), only 10 percent ofthecollege slang lexicon remained in use, and over fifteen years (1972-1987), only four out of two hundred words stayed thesame. Slang is, she concludes, quite ephemeral.
Butnot all slang words are ephemeral!“Eventually, some slang passes into standard speech; other slang flourishes for a time with varying popularity and then is forgotten; finally, some slang is never fully accepted nor completely forgotten.O.K.,jazz, andA-bombwere recently considered slang, but they are now standard usages.Bluebelly,Lucifer, and thebee’s kneeshave faded from popular use.Bones(dice),beat it, andcoolseem destined to remain slang forever. Chaucer used the first and Shakespeare used the second” (Flexner1986:xix).“No slang word can top ‘cool,’ which linguist Pamela Munro ranks as one of the longest-standing slang words on campus. ‘Cool,’ which originated in New York jazz clubs in the 1930s, ‘has immense staying power,’ says Munro. ‘I don’t know any other words like that. I think ‘cool’ is just amazing” (Elie2001).