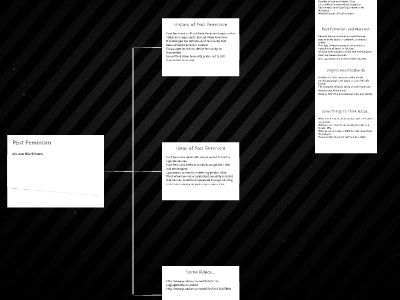 Post Feminism
Megan Blackburn
Post Feminism or Third Wave Feminism began in the 1990s as a response to Second Wave Feminism.It challenged the definitions of femininity that Second Wave Feminism created.Encourages women to define femininity for themselves.Some Third Wave Feminists prefer not to call themselves Feminists.
History of Post Feminism
Post Feminism deals with issues meant to limit or oppress women.Post Feminism seeks to break down gender roles and stereotypes.Oppression comes from defining gender roles.Third Wave Feminism celebrated sexuality and said that women could be empowered through working in the sex industry-strippers, porn stars, extc.
Ideas of Post Feminism
http://www.youtube.com/watch?v=cCQI-ougLsg&feature=relatedhttp://www.youtube.com/watch?v=3YA13GNT8Mc
Some Videos…
Some critics argue that there is lack of cause in Third Wave Feminism.First Wave Feminism= Right to VoteSecond Wave Feminism=Ended Legal Sex Discrimination and Equal Opportunity in the Workplace.What is the goal of Post Feminism?
Criticism of Post Feminism
Ideology is an unconscious process where we assume truths based on culturally constructed beliefs.The ideas of what it means to be feminine or masculine is all based on ideology.We have been taught to think that the thingswe think are trueare the truth.Men oppress women for the benefit of society.
Post Feminism and Marxism
Published in 1928, made into a film in 1992Semi-biographical novel based on one of Woolf’s friendsThe character Orlando takes on both male and female roles in the novelOrlando blurs the line between male and female
Virginia Woolf’sOrlando
What does it mean to grow up as a male or female in our society?What are our “roles” in our society as a male or a female? Why?What can we do today, in 2009 to break down these stereotypes?How does Marxism and Post Feminism relate?
Some Things To Think About…