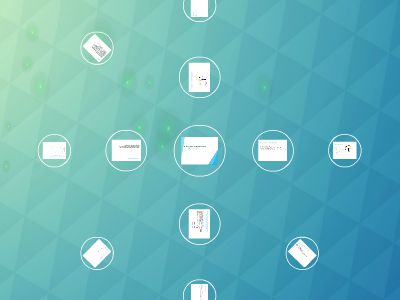 Insulin Lecture
Unit 1 Lesson 6 Activity 3- Insulin and the Human Body
Beta Cells in the Pancreas
Insulin is synthesized in beta cellsInsulin helps to regulate metabolism of carbohydrates and fatsInsulin is secreted by the pancreasWithout insulin to facilitate absorption of glucose the levels become too high
Figure 5 Diagram of the Insulin and Glucose Regulation Model
An increase of glucose depolarizes the membrane surrounding the beta cells.Calcium from outside of the beta cell rushes into the beta cell.This increase of calcium facilitates the release of stored insulin.Once the glucose levels drop, insulin release slows down or stops.
bio.davidson.edu
Cells and Glucose
Without insulin, cells cannot bind with glucose and use this energy source for needed survival. These cells would have to find alternative energy sources like fatty acids.
Figure 6 Insulin Receptor
http://arbl.cvmbs.colostate.edu
Insulin Receptor
The insulin receptor has two alpha subunitsin yellow and two beta subunits as shown inblue. The red lines are the sulfur bonds andform a disulfide bond between the twocomplexes.
Carbohydrates and Lipids-Metabolism
Glucose is regulated by insulinGlucose is extracted during digestionWith an increase in glucose the pancreas secretes insulinThe liver maintains constant levels of glucose within the boy
Lipoproteins
Used in other tissues like adiposeMakes triglyceridesInsulin inhibits the breakdown of fat in adipose tissueInsulin responsible for accumulation of triglycerides in adipose tissue
Metabolic Reactions and Insulin
Insulin stimulatesGlucose transportAmino acid transportGlycogen synthase activityIncreases rate of general protein synthesisDecreases lipolysis and protein degradation
Insulin and the Effect on the Human Body
Insulin regulates many cellular processesIncluding:DNA synthesis,RNA synthesis,Cell growth,Protein and fat synthesis.Insulin is mainly concerned with the regulation of glucose uptake in the “clinical manifestation of diabetes.”
Diabetes
Diabetes can affect all ethnic groups.Idiopathic diabetes type I- is an insulin dependent condition that manifests usually in childhood. The beta cells are destroyed by an autoimmune response.Idiopathic diabetes Type II- Non-insulin dependent and is characterized by persistent hyperglycemia (excess glucose in the bloodstream). Many causes can be attributed, but obesity seems to be a common factor. Type II can often be controlled through a low carbohydrate diet.Secondary diabetes- has many causes including:Gestational diabetes that develops during pregnancy.Maturity onset diabetes that happens before age 25 causes include:Pancreatic disease, endocrine disease, drug-induced, mutations in genes or receptors
References
www.arbl.cvmbs.colostate.eduwww.bio.Davidson.edu