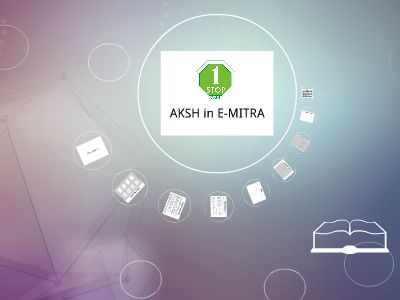 AKSH in E-MITRA
EMITRA
Emitra is an ambitious E-governance initiative of Government of Rajasthan which is being implemented in all 33 Districts of the state usingPublic-Private Partnership (PPP)model for convenience and transparency to citizens in availing various services of the Government and Private Sectors under a single roof at their door steps using an e- platform.The services are delivered via counters known as CSC (Common Service Centers) kiosks in Rural Areas and e-Mitra kiosks in urban areas and also online.Hence, these counters provide services related to various departments in an integrated and easily accessible manner to people residing in rural as well as urban areas.The project has been operational since 2005. Initially it was functioning through a Client Server based Application Software developed by Department of IT&C. In 2010, the old Client Server Application was migrated to Web-based on-line e-Mitra application across all the 33 districts.
KEY ELEMENTS of EMITRA
SERVICESOFFERED
UPCOMING SERVICES

KIOSK
KIOSK is the counter through which the services are delivered to the customer. It can be present in any location and should be able to entertain the consumer in large numbers.
AKSH in EMITRA
AKSH has been working in the field of E-governance in Rajasthan since 2002,the first private player or Local Service Provider (LSP)to come with up such solutions.AKSH has4800functioning Kioskscalled “Emitra” inthe entire state ofRajasthan,which includes urban, Semi Urban and Rural areas.AKSH currently offering167G2C(Government to citizen) and25 B2C(Business to Citizen) services.AKSHhaving Largest number of operational kiosk vs kiosks allotted to concerned service provider and AKSH having top position for transactions also.Duetotransparencyin the process at Aksh, it is thehighest rated service providerby Department of IT&C and Gramdoots.Only LSP currently conductingtraining programmesand carrying out capacity building initiatives.
FUTURE PROJECTS
Integrate the online portal with payment gateways, and provideauthenticated accessto the Kiosk holders for accessing this portal.Integrate banking services in the Kiosks, which can help the customers in opening accounts with theirfingerprints as identification, using the fingerprint scanner provided to the Kiosk holders, and then being able to receive as well as send their money.Add thedistribution servicesto the existing collection services, which will lead to tremendous increase in the service basket possibilities as the customer can make payments, as well as receive them.Setuponline computer education centers, with tie ups with leading computer education providers, promoting education and literacy in the rural areas.
SWOT ANALYSIS
THANK YOU