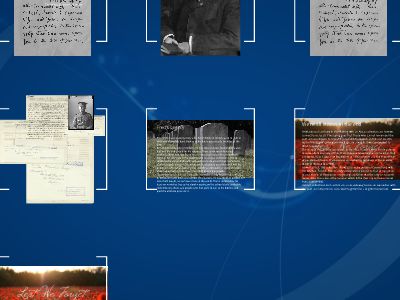 The Headmaster’s LetterJ P Firth to the family of Fred McKee
Joseph Firth was the Headmaster of Wellington College between 1892 and 1920. During WWI, he encouraged alumni of the school to do ‘their bit for the war effort’, leading hundreds to enlist.During the war, letters were frequently exchanged between these ex-students and Firth.Of those who enlisted, 222 were killed. Every time he received news of this, Firth personally wrote a letter to the family of the deceased.This letter was written to the family of Fred McKee, one of three brothers all of whom had enlisted, and the only one not to come home.
J P Firth
Addressed to Arthur McKee of Richardson Street, Nelson, the letter read as follows:5/10/1916Dear Sir,On behalf of all connected with this school, I write to express to you and yours our deepest sympathy in the great grief that has come upon you in the loss of your son, and also the hope that the fact of his having given his life gallantly in the noblest of causes may be a consolation to you.Yours sincerely,J. P. Firth
The Letter
Fredrick George McKee was an alumnus of Wellington Boys College when war broke out. He enlisted early, possibly due to Firth’s call to arms, and left from Wellington in October 1914. He fought in North Africa and on the Western Front, and was killed on 20 September 1916 in Somme.At the time of his death, he was a Second Lieutenant in the Canterbury Infantry Regiment of the 2ndBattalion. He had the military number 6/308.In May 1915, his father received a letter of diary entries from him. In them, McKee described some of the war in Egypt in January and February 1915. The soldiers camped near Ismailia, an Egyptian city, and the diaries go on to describe a Central Powers attack on the camp.Also in 1915 (in August) McKee thanked the people of Nelson for buying cigarettes and tobacco for him: “Many thanks for tobacco. It was a regular God-send, as it is unprocurable out here.”
Fred
Fred McKee was a young man, who, like millions of others, went to fight in WWI and ultimately died. He was in his late teens or early twenties at the time.But despite being one of millions, he was also a unique human being who had one life and gave it for his country. There is not much historical evidence about him, but by no means does that make him unimportant. Some of the artefacts in the Walking with an ANZAC collection relate to soldiers who survived the war and went on to do great things, but what is often forgotten is that many didn’t, and each young man who died had the potential to do things just as great, and the world could be vastly different place today had just one fewer man died on the battlefields.The Headmaster’s letter is a valuable reminder of this: he didn’t see the 222 of his alumni who died as a number or a statistic, he saw them as people, as faces he’d taught, as 222 fewer lives in the world. This is reflected by his tears on Armistice Day as he stood weeping on the school stairs, probably remembering those 222 people who had gone to war at his bidding and paid the ultimate price for it.
Fred’s Legacy
Artefacts such as those in the Walking with an Anzac collection are how we connect to our past. The saying goes that ‘those who cannot remember the past are condemned to repeat it’, and collections such as this one curated by the Ministry of Culture and Heritage are a way that we can connect to what happened.The story of Fred McKee connected to the Headmaster’s letter to his parents is an excellent example of this. From this one resource there is so much that can be found out about his life, the life of other soldiers and the experiences of people back home. It also serves as a sobering reminder of the massive waste of life that was WWI.As well as that, this collection allows us to make personal connections with the ANZACs. For me, Fred’s family’s story seems similar to that of my great-grandfather’s; of three sons, my great-grandfather was the only on to come home. Also, Fred died at the Somme, which is the river my surname comes from (Somerville).Overall, collections such as this are a valuable way to remain connected with our past and help remind us to work together for a brighter tomorrow.
We’re all stories in the end