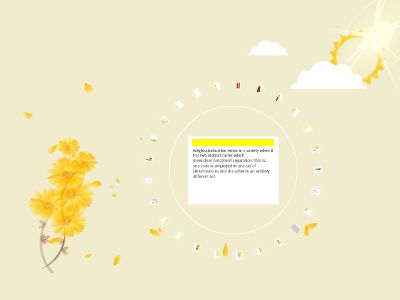 Adiglossicsituation exists in a society when it has two distinct codes whichshow clear functional separation; that is, one code is employed in one set ofcircumstances and the other in an entirely different set.
Diglossiais a relatively stable language situation in which there is a very divergent, highly codified superposed variety.This variety is learned largely by formal education and is used for most written and formal spoken purposes.
In the Arabic situation the two varieties are Classical Arabic (H) and the various regional colloquial varieties (L).You do not use an H variety in circumstances calling for an L variety, e.g., for addressing a servant; nor do you usually use an L variety when an H is called for, e.g., for writing a ‘serious’ work of literature.
The Features ofDiglossia
FunctionPrestigeLiterary heritageAcquisitionStandardizationStabilityGrammarLexiconPhonology
1. Function
2. Prestige
The speakers regard H as superior to L in a number of respects.H is considered more educated, more beautiful, more logical, better able to express important thoughts, etc.
3. Literary Heritage
There is a sizable body of written literature in H which is held in high esteem by the speech community.
4. Acquisition
Adults use L in speaking to children and children use L in speaking to one another.The actual learning of H is chiefly accomplished by the means of formal education.
5. Standardization
There are studies or books on grammars, dictionaries, treatises on pronunciation, styles, and so on, of the H.There is an established norm for pronunciation, grammar, and vocabulary which allows variation only within certain limits.
6. Stability
Diglossiatypically persists at least several centuries, and evidence in some cases seems to show that it can last well over a thousand years.
7. Grammar
H has grammatical categories not present in L.
8. Lexicon
H includes in its total lexicon technical terms and learned expressions which have no regular L equivalents.L includes in its total lexicon popular expressions and the names of very homely objects or objects of very localized distribution which have no regular H equivalents.
9. Phonology
The sound systems of H and L constitutes a single phonological structure of which the L phonology is the basic system.Note: Ferguson states, “It may seem difficult to offer any generalization on the relationships between the phonology on H and L indiglossiain view of the diversity of data.
Bilingualism and Multilingualism
Monolingualism: use of one language.Bilingualismis the phenomenon of speaking and understanding two languages.
Individual Bilingualism– the use of two (or more) languages by an individual:E.g., an individual who speaks both English and Spanish as described by many of the informants in the Hinton article:Societal Bilingualism– the use of two (or more) languages within a given communityE.g., the bilingual setting in India, Canada, Switzerland, Malaysia, etc.
Describing Individual Bilingualism & Multilingualism
The term ‘bilingualism’ may mean different things to different people.To the average person, bilingualism can be loosely defined as:the use of two languages orthe native-like control of two languages.
Describing Individual Bilingualism
Bilingualism has often been defined in terms of language competence. But a definition of bilingualism must also account for the impact of social, psychological and cultural variables on the bilingual individual.How did you (or someone you know) become bilingual?What is your proficiency in each language?When do you use each language?
Degree of Bilingualism - Definitions
Bloomfield (1933): native-like control of two languages (maximalist)Mackey (1962): the ability to use more than one language (minimalist)Weinriech(1953): the practice of alternately using two languagesHaugen (1953): the point where a speaker can first produce complete meaningful utterances in the other language
Degree of Bilingualism – Balanced Bilinguals
Individuals fully competent in both languages (Lambert et al. 1959)Almost impossible to achieve (BaetensBeardsmore1982)Sociolinguistic forces demand that bilinguals organize their languages in functionally complementary spheres. No society needs two languages to perform the same set of functions.
Degree of Bilingualism – Dominant Bilinguals
Individuals who are dominant in one language.Less dominant language = ‘subordinate.’Dominance does not apply to all domains.One may be dominant in the subordinate language in some domains.
Context of Bilingual Language Acquisition
Primary context / natural bilingualism: situations in which a child acquires both languages in a naturalistic setting without any structured instruction.Secondary context / school bilingualism: situations in which a child acquires one of the languages in a structured setting, usually school.
Context of Bilingual Language Acquisition
Naturalistic fused setting: no separation of context for both languages; child is exposed to both languages in the same context.Naturalistic separate setting: one parent, one language model; but also applies to other interlocutors, i.e., siblings, peers, grandparents, etc.
Context of Bilingual Language Acquisition
Elective bilinguals: individuals who have some element of choice about learning a second language.
Age of Acquisition
Possible factors:neurologicalAptitudesAttitudeidentity and motivationnature of exposure
Domains of Use
Domains: the different spheres of influence in a speaker’s life:FamilyFriendshipReligionEducationEmployment
Additive vs. Subtractive Bilingualism
Additive bilingualism: an environment conducive to the development of the first language as well as the development of the second language results in the maintenance of both.Subtractive bilingualism/ differential bilingualism: Without first language support, the learning of a new language may entail the loss of that first language.