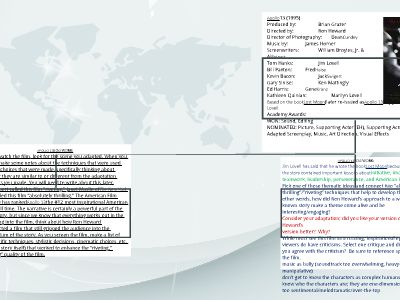 Apollo13 (1995)Produced by: Brian GrazerDirected by: Ron HowardDirector of Photography: DeanCundeyMusic by: James HornerScreenwriters: William Broyles, Jr. &AlReinartTom Hanks: Jim LovellBill Paxton: FredHaiseKevin Bacon: JackSwigertGary Sinise: Ken MattinglyEd Harris: GeneKranzKathleen Quinlan: Marilyn LovellBased on the bookLost Moon(later re-issued asApollo 13) by JeffreyKlugerand Jim LovellAcademy Awards:WON: Sound, EditingNOMINATED: Picture, Supporting Actor (EH), Supporting Actress (KQ), Adapted Screenplay, Music, Art Direction, Visual Effects
APOLLO 13LOG WORK:As you watch the film, look for the scene you adapted. When you find it, make some notes about the techniques that were used and the choices that were made, specifically thinking about whether they are similar to or different from the adaptation decisions you made. You will need to write about this later.Roger Ebert called this film “riveting.” Janet Maslin ofThe New York Timescalled this film “absolutely thrilling.” The American Film Institute has rankedApollo 13the #12 most inspirational American film of all time. The narrative is certainly a powerful part of the NASA story, but since we know that everything works out in the end going into the film, think about how Ron Howard constructed a film that still gripped the audience into the momentum of the story. As you screen the film, make a list of the specific techniques, stylistic decisions, cinematic choices, etc. (not the story itself) that worked to enhance the “riveting,” “thrilling” quality of the film.
APOLLO 13LOG WORK:Jim Lovell has said that he wrote the bookLost Moonbecause he thought the story contained important lessons aboutinitiative, imagination, teamwork, leadership, perseverance, and American ingenuity. Pick one of those thematic ideas and connect two “absolutely thrilling”/”riveting” techniques that help to develop the theme. In other words, how did Ron Howard’s approach to a well-known story make a theme come alive and be interesting/engaging?Consider your adaptation; did you like your version or Ron Howard’sversion better? Why?While most see this film as a rousing, inspirational epic tale, viewers do have criticisms. Select one critique and discuss it. Do you agree with the criticism? Be sure to reference specifics from the film.music as bully (soundtrack too overwhelming, heavy-handed, manipulative)don’t get to know the characters as complex humans/don’t get to know who the characters are; they are one-dimensionaltoo sentimental/melodramatic/over-the-top