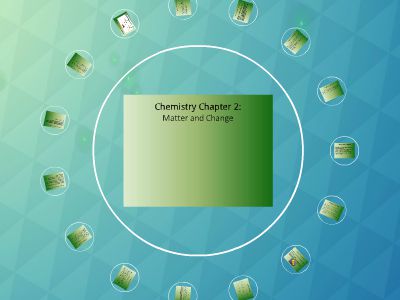 Chemistry Chapter 2:Matter and Change
2.1 Properties of Matter
Properties used to describe matter can be extensive or intensive:Extensive – Depends on the amount of matter in a sample. Examples: mass and volumeIntensive – Depends on the type of matter in a sample, not the amount of matter. Examples: Hardness or texture.
Identifying Substances
Substance – matter that has a uniform and definite compositionEvery sample of a given substance has identical intensive properties because every sample will have same compositionPhysical property – quality or condition of a substance that can be observed or measured without changing the substance’s composition
Identifying Substances
Physical properties can be used to identify substances.Table 2.1 on page 40:What is a solid (at room temperature) yellow substance that melts at 115oC and boils at 445oC?
States of Matter
SolidDefinite shape and volume, almost incompressibleLiquidIndefinite shape, flows, definite volume, almost incompressible, expand slightly when heatedGastakes shape and volume of container. Vapor term used to describe gaseous state of substance that is generally a liquid or solid at room temp (water vapor)
Physical Changes
During physical change, some properties of a material change, but the composition does not. Examples: Melting, freezing, boiling, condensing.Can be reversible (melting or boiling) or irreversible (cutting hair, cracking an egg)
2.2 Mixtures
Mixture – physical blend of two or more componentsHeterogeneous – composition not uniform throughout chicken noodle soup, pizzaHomogeneous – composition is uniform. Another name is solution. Many are liquids, some gases (air) and some solids (steel – mixture of iron, chromium, and nickel)
Separating Mixtures
Differences in physical properties can be used to separate mixturesOlive oil and vinegar – could decant, or freeze until oil turns to solidFiltration – separate solid from liquidDistillation – liquid boiled to produce vapor which is condensed back to liquid
2.3 Elements and Compounds
Element – simplest form of matter that has a unique set of propertiesCompound – substance that contains two or more elements in a fixed proportion C3H8is propane and CH4is methaneCompounds can be broken down into simpler substances by chemical means, but elements cannot.
Breaking Down Compounds
Need chemical changes – produces matter with a different composition than original matter. Heating sugar is exampleheatSugarcarbon(s)+ water(g)
Properties of Compounds
Generally, properties of compounds are different than those of their component elements.Water is an example: H and O are gases at room temp while H2O is a liquid
Distinguishing Substances and Mixtures
Definite composition
Variable composition
Symbols and Formulas
Chemists use symbols and formulas to represent elements and compoundsFirst letter of chemical symbol always capitalized. When second letter is used, it is lowercase.NaClC6H12O6
2.4 Chemical Reactions
Reactant – substance present at start of reactionProduct – substance produced in a reactionClues to a chemical change: transfer of energy, change in color, production of a gas, formation of a precipitate.
Conservation of Mass
During any chemical reaction, the mass of the products is always equal to the mass of the reactants.Law of Conservation of Mass – in any physical change or chemical reaction, mass is conserved.
Chapter 2 Problems
2, 5, 8, 11, 13, 14, 20, 21, 24, 25, 26, 27, 29, 30, 32, 34, 35, 40, 42, 43, 46, 49, 50, 54, 56, 60, 61, 62, 63, 66, 67, 69, 72, 76, 77, 80