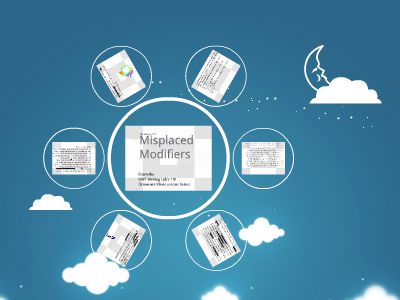 Misplaced Modifiers
From theUWF Writing Lab’s 101Grammar Mini-Lessons Series
Mini-Lesson #71
The misplaced modifier is placed too close to some other noun or pronoun which it does not intend to modify. An adjective, an adverb, or a phrase or clause used as an adjective or adverb should refer to a specific word in the same sentence and be placed close to it so that the relationship is clear. A modifier is misplaced if intervening words obscure the relationship between it and the word it is intended to modify.A misplaced modifier is confusing because the reader may associate it with the wrong word.
Incorrect: There was a debate on the bill to provide financial aid to homeless personsin the Senate.Whom is the phrasein the Senatedescribing? Its proximity tohomeless personssuggests that these homeless persons arein the Senate; thus, in the Senate is presented as an adjectival phrase describingpersons. Place the modifying element next to the word it actually describes.Correct: There was a debatein the Senateon the bill to provide financial aid to homeless persons.
Incorrect: Ionly needten more hours to graduate.Do youonly needten more hours to graduate or do youneed onlyten more hours to graduate? Make sure that adverbs modify the intended adjective, verb, or other adverb.Correct: Ineed onlyten more hours to graduate.
Aninfinitive is a single grammatical unit which consists oftoplus thepresent form of any verb. Since the infinitive is a single grammatical unit, careful writers frown on “splitting” the infinitive, that is, placing a modifier (usually an adverb) between the prepositiontoand the verb. Many authorities discourage the use of the split infinitive; others accept this structure especially if writing the sentence without splitting the infinitive would create an “unidiomatic” expression. Careful writers use their discretion and if possible try not to split an infinitive.
Split infinitive: Dentists encourage childrento regularly brushtheir teeth.Revised: Dentists encourage children to brush their teeth regularly.
A squinting modifier is one, which, because of its placement in the sentence, seems to be modifying two different words.Squinting: Patty who was walking quickly reached the disco.Revised: Patty, who was walking, reached the disco quickly.Revised: Patty, who was walking quickly, reached the disco.