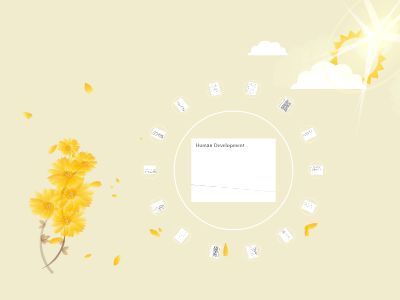 Human Development
Disorders of the male reproductive system
Testicular Torsion-“twisted testis”. A rare condition when the spermatic cord becomes twisted during strenuous exercise or sleep.Undescended Testes-When one or both testes remain inside the body, rather than hanging loose in the scrotum.
Inguinal Hernia-When part of an intestine protrudes into the scrotum through a weakness in the abdominal wall.Infertility- Unable to reproduce.Enlarged Prostate Gland-When the prostate becomes larger and obstructs the outlet of the urinary bladder.
Prostate Cancer-Cancer in the prostate gland, the most common cancer in American males.Testicular Cancer-cancer of the testes, most common form of cancer for males between the ages of 15 and 35.
Menstrual Cramps-Cramps in the lower abdominal area that are caused by the contracting of the uterus as it works to expel its lining.PMS- (premenstrual syndrome) physical symptoms include swelling and tenderness of the breasts, bloated feeling, headaches and fatigue. Emotional signs are depression, crying, anxiety, and anger.
Disorders of the female reproductive system
Disorders of the female reproductive system
Vaginitis– Infection of the vagina. Signs include itching or soreness of the vulva, an unpleasant odor, an increase in discharge from the vagina, and sometimes a burning sensation during urination.Toxic Shock Syndrome- a rare bacterial infection. Signs include high fever, nausea, diarrhea, dizziness, and a sunburn-like rash.
Ovarian Cysts-a growth in the ovary. Signs might be pain, or no symptoms at all.Cancers-cervical cancer-checked through pap tests.breast cancer-checked through mammograms and breast examinations.Infertility- not being able to reproduce
Some Words to Know
Fertilization-the union of sperm and eggEgg-Female reproductive cellOvaries-female reproductive structures that produce eggs and sex hormonesOvulation-release of an egg from an ovary
Testes-AKA testicles; makes sperm and produces testosteroneSperm-male reproductive cell necessary for making a new humanPenis-reproductive structure used to deposit sperm
Vagina-female reproductive structure which receives spermCervix-the base of the Uterus has a small opening that sperm can pass throughUterus-AKA womb is a hollow muscular organ that provides a place for the baby to grow before birth.
Embryo-fertilized egg after it has attached to the uterine wallFetus-a developing individual from the ninth week of pregnancy until birth
Complications During Pregnancy & Birth
Ectopic Pregnancy-the pregnancy tissue or embryo becomes implanted somewhere in the abdomen other than the uterus. The embryo might die and often must be removed by surgery.Miscarriage-embryo is expelled from the uterus before it is sufficiently developed. Caused by genetic defect, illness in the mother, drugs the mother has taken, or other factors. Miscarriage usually occurs during first three months of pregnancy.
Complications During Pregnancy & Birth
Premature Birth-a baby is born before it is completely developed. A baby that is born before the 37thweek of pregnancy is considered premature. Premature babies are placed in new born intensive care where they can develop further.Cesarean Section-AKA C-section. If delivery through birth canal is considered risky for any reason, an operation is performed. An incision is made through the abdomen and uterus and the baby is removed.
Complications During Pregnancy & Birth
Toxemia-the pregnant woman has high blood pressure, swelling, and protein in the urine. Untreated it can result in convulsions, coma, and death of mother & infant. Common among teenagers, older women, and women who already have health issues.RhIncompatibility- an antibody in the woman’s body attacks cells in the infant’s blood cells. This may happen if the mother isRhnegative and the baby isRhpositive. This can be avoided by giving injections which prevent the woman’s body from producing theRhantibody.
Multiple Births-two or more infants are born together. 2 infants-twins, 3 infants-triplets, 4 infants-quadruplets, 5 infants-quintuplets.Stillbirth-an infant is born dead 22 weeks or more after conception.