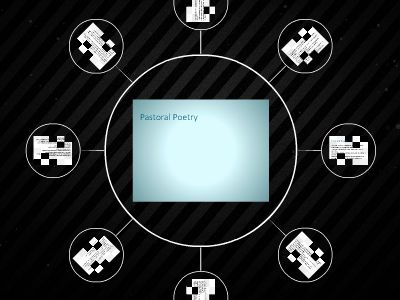 Pastoral Poetry
Pastoral Poetry
"Pastoral" (Latin for "shepherd") refers to a literary work dealing with shepherds and rustic life.It presents an idealized rather than realistic view of rustic life.Classical (Greek and Latin) pastoral works date back to the 3rd century B.CShakespeare's contemporaries revived and imitated the topics and forms of classical pastoral poetry.
Drawinga contrast between the innocence and serenity of a simple life and the misery and corruption of city and especially court life.Naturalnessand innocenceincontrast to the corruption and artificiality of city andcourt.The characters in pastoral poetry are often used as vehicles for the expression of the author’s moral, social, or literary views.
Common topics of pastoral poetry includelove and seduction;the value of poetry;death and mourning;the corruption of the city or court vs. the "purity" of idealized country life;politics (generally treated satirically: the "shepherds" critique society or easily identifiable political figures).
A common pastoral poetic genre is the eclogue (a dialogue between two shepherds).This conversation may be between a shepherd and the shepherdess he loves (generally his attempt to seduce her);a "singing contest" to see which shepherd is the better poet (a third may act as judge);lament a dead friend (a eulogy or elegy);praise a notable individual. Laudatory poems,songs of courtship andcomplaints of a lovesick shepherd
An important subgroup of the pastoral eclogue or monologue is the elegy, which expresses the poet's grief at the loss of a friend or an important person.Conventional features of pastoral elegies include:the invocation of the Muse;expression of the "shepherd"-poet's grief;praise of the dead "shepherd";invective against death;effects of the death upon nature (disruptions in climate etc. as expressions of a personified Nature's grief and sympathy);and ultimately, the poet's acceptance of the inevitability of death and hope for immortality.
Renaissance poets expanded the pastoral mode to include the romance and drama.Pastoral dramas first appeared in the 15th and 16th centuries and pastoral romance novels during the 16th and 17th centuries.The pastoral drama or poem or romance depicted life far from the city in a countryside that was both idyllic and ideal. The shepherds and shepherdesses in a pastoral poem lived an almost perfect existence;
Pastoral poems first appeared in English in the early 1500s.Inpastoral narratives, city dwellers retreat to the countryside, which turns into a "fantasy paradise" where shepherds spend their time composing poems to their sweethearts.
Recognizable conventions include:shepherds who are also poets, writing poems and playing upon pipes;the good old shepherd, poor but eager to give hospitality to strangers and to those in need;the "savage" man or men who lacked courtly upbringing but possessed an innate gentleness and gentility…;the beautiful shepherdess;the pastoral elegy, mourning the death of a shepherd or shepherdess who was often also a poet;the pastoral debate, on topics like country versus city