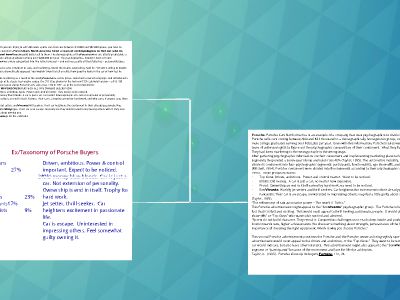 Porsche- Porsche Cars North America is an example of a company that uses psychographics to divide up its consumers. Porsche sells cars costing between $40 and $82 thousand to a demographically homogenous group, consisting of 40-something male college graduates earning over $200,000 per year. Even with this information, Porsche’s sales were slipping. They hired a team of anthropologists to figure out the psychographic composition of their consumers. What they found surprised them. They had been marketing to the wrong people in the wrong ways.After gathering psychographic information on their consumers and implementing marketing plans tailored to these specific segments, they ended a seven-year slump and sales rose 48% (Taylor, 1995). The automotive industry, in general, attempted to divide its consumers into four psychographic segments: participants, functionalists, ego show-offs, and do-it-yourselfers (Mitchell, 1994). Porsche consumers were divided into five segments according to their psychographic characteristics (Taylor, 1995). These groups included:·        Top Guns: Driven, ambitious. Power and control matter. Want to be noticed.·        Elitists: Old money. A car is just a car, no matter how expensive.·        Proud: Ownership an end in itself earned by hard work, no need to be noticed.·        BonVivants: Worldly jet setters and thrill seekers. Car heightens the excitement in their already passionate lives·        Fantasists: Their car is an escape, uninterested in impressing others, may feel a little guilty about owning a Porsche (Taylor, 1995).“The refinement of raw automotive power – The new 911 Turbo.”This Porsche advertisement might appeal to the “bonvivants” psychographic group. The Porsche is being sold because of the fact that it is fast and exciting. This would most appeal to thrill seeking, passionate, people. It would also appeal to the “ego show-offs” or “Top Guns” who want to be noticed and admired.“Sports do not build character. They reveal it. Competition challenges us to reach deep inside and push ourselves past previous limits towards new, higher achievements. We discover something about strength, perseverance of the human spirit and the importance of choosing the right equipment. Which is why you choose Porsche.”This second Porsche advertisement positions the Porsche and the Porsche owner as being stylish, sporty, and hip. This advertisement would most appeal to the driven and ambitious, or the “Top Guns.” They want to be noticed, as the bright yellow car would indicate, but also have other interests. This advertisement might also appeal to the “bonvivants” psychographic segment or “participants” because of the excitement and love for life the ad depicts.Taylor, A. (1995). Porsche slices up its buyers.Fortune, 131, 24.
When every month you are trying to sell 500 exotic sports cars that cost between $40,000 and $82,000 apiece, you have to really know your customers.PorscheCars North America hired a team of anthropologists to find out who its owners were and howPorschecould better sell to them. The demographics of thePorscheowner are utterly predictable: a 40-something male college graduate earning over $200,000 per year. The psychographics, however, were of more interest.Porscheowners were categorized into five rather unusual -- and not necessarily all that flattering -- personality types (see box).Richard Ford,Porsche'svice president of sales and marketing, found the results astonishing. Said he: "We were selling to people whose profiles were diametrically opposed. You wouldn't want to tell an elitist how good he looks in the car or how fast he could go."Besides refining its marketing as a result of the study,Porschehas cut its prices, launched a new ad campaign, and introduced a successful redesign of its classic rear-engine coupe, the 911. (See photo for the hot new 1995 Cabriolet version -- a $72,400 trophy.) After a seven-year slump,Porsche'sU.S. sales rose 48% in 1994, as of the end of November.A TAXONOMY OFPORSCHEBUYERS % OF ALL TYPE OWNERS DESCRIPTIONTop Guns 27% Driven, ambitious types. Power and control matter. They expect to be noticed.Elitists 24% Old-money blue bloods. A car is just a car, no matter how expensive. It is not an extension of personality.Proud 23% Ownership is an end in itself. Patrons Their car is a trophy earned for hard work, and who cares if anyone sees them in it?Bon 17% Worldly jet setters andVivantsthrill seekers. Their car heightens the excitement in their already passionate lives.Fantasists 9% WalterMittytypes. Their car is an escape. Not only are they uninterested in impressing others with it, they also feel a little guilty about owning one.PHOTO: Bonvivantsgo for the Cabriolet.
Ex/Taxonomy of Porsche Buyers
Top Guns 27%Elitists 24%Proud Patrons 23%BonVivants17%Fantasists 9%
Driven, ambitious. Power & control important. Expect to be noticed.Old-money blue-bloods. Car is just a car. Not extension of personality.Ownership is end in itself. Trophy for hard work.Jet setter, thrill-seeker. Car heightens excitement in passionate life.Car is escape. Uninterested in impressing others. Feel somewhat guilty owning it.