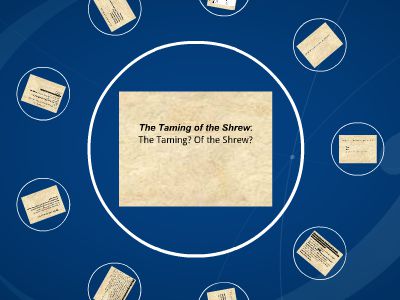 The Taming of the Shrew:The Taming? Of the Shrew?
Do you think Kate wants to get married?
YesNoDude, I, like, just don’t know.
Why would Kate act like a shrew, which is both socially denigrating and off-putting to suitors, if she really wants to get married?
The role of shrew challenges societal masculinity (she’s looking for arealman)The role of shrew challenges traditional femininity(chaste, silent,and obedient)The role of shrew is a defensive measure (vs. her father’s favoritism for Bianca and the treatment of women as objects or goods)All of the aboveNone of the above
The problem of getting locked in a role:
See SarahBadel’sKate in the BBC film production ofTamingthe binding scene, 2.1.1-36 (pp. 36-37)DVD: 21.58 - 26.06
What is Petruchio’s most effective “taming” method?
A) Classic brainwashing/intervention strategy- removes her from her home, and deprives her of food & sleepB) Treats her “illness” with contraries (Galenicmedical theory)-if she ”rail”“She sings as sweetly as a nightingale” (p. 42)- bars burned meat because he and Kate are choleric (p. 72)C) Treats her “illness” with likes (Paracelsianmedical theory)- he acts shrewishly, as in beating his servantsKate defends them (pp. 69, 71); “He kills her in her own humor” (p. 72)D) Advocates anti-materialism- comes in motley to their wedding- destroys Kate’s fashionable dress, making them return home in their “honest mean habiliments” (p. 85)E) All of the above
By the end ofTaming, Kate is
A) Tamed into being the ideal woman/wifeMore socialized, if not fully socializedSavvy in the tricks of playing socially acceptable games to get what she wantsUnchanged
Kate’s final speech
Two different film versions of the concluding scene:The one played by SarahBadel(BBC)DVD 1.56.00 – 2.06.25The one played by Elizabeth Taylor (Zeffirelli)DVD 1.55.33 – 2.00.43Which version do you like best?A)BadelB) Taylor
In Kate’s final speech is she
Deadly seriousMostly seriousIronic throughoutJust playing the role of good wifeMocking
In conclusion, I resubmit my sketch of the Katherine/Petruchioplot as follows:
Art, like life, is full of questions, and many roles.