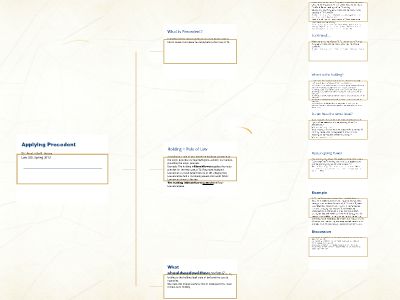 Applying Precedent
By: Ana Luiza R. SousaLaw 300, Spring 2016
What is Precedent?
Precedent is the reason-giving force of an earlier case or line of cases on an issue currently before the court at T2.
Holding = Rule of Law
A holding is a rule of law, therefore holdings can serve as the major premise of a legal syllogism—similar to a statute providing the major premise.Example: The holding inBlanchflowersupplies the major premise for the new case at T2: Rosa sues husband Lawrence for a fault based divorce in NH, alleging that Lawrence has had a continuing sexual affair with Pablo; Lawrence moves to dismiss.The holding inBlachflowercontrolsthe Rosa-Lawrence issue.
What shouldwedowithprecedent?
Our job is to interpret what the holding in T1 stands for by looking to the holding itself (rule of law) and the court’s reasoning.We must also interpret what a line of cases stand for, even if there is no holding.
What does the holding stand for?
Sometimes, the parties at T2 agree with one another about what the holding was at T1. But sometimes, the parties at T2 offer different readings of the T1 holding.We say that they disagree with one another about “what the case in T1” stands for.For example, the parties in the T2 seven-up case disagree with one another about what Boyd stands for.Keep in mind, that at times, a case in T1 can have more than one plausible reading.Remember, during the midterm you were asked to give a plausible reading of Boyd so that it controlled the case in T2, and a plausible reading of Boyd so that it did not control the case in T2.
Continued….
When there is a line of cases T1-T3, the parties in T4 might disagree with one another about what the line of case stands for.For example, what do the four “lewd intent” cases in exercise one stand for?
Where is the holding?
A case can function as precedent even if it states no holding. That is because courts should treat like cases alike.For example, the midterm multiple choice questions asked about a series of cases applying the vehicle-in-park-ordinance:T1: Defendant adult who rode her bicycle in the park violated the ordinance.T2: Defendant law student who rode his skateboard in the park violated the ordinance.T3: Defendant four-year-old who rode her tricycle in the park did not violate the ordinance.T4: Defendant twelve-year-old who rode his scooter in the park violated the ordinance.At T5, Gould has charged defendant college student with violating the ordinance. Defendant rode her one-wheeled battery-powered self-balancing device in park.
Do we have the same issue?
Issue in case 1: “Is a corporation a person who can claim rights to free speech within the meaning of the First Amendment?”What will case 1 determine?Issue in case 2: “Is a corporation a person for purposes of claiming the personal privacy exemption within the meaning of the Freedom of Information Act?”What will case 2 determine?
Reason-giving Power
The reason-giving power of precedent can be conclusive at T2 (as when the T1 holding controls). But precedent can also be reason-giving yet not conclusive at T2.Example: The holding in Smith does not control the issue in Watson, but the semantic rationale is Smith continues to provide a reason for decision in Watson.
Example
At T1, the Tennessee Supreme Court handed down its decision in Boyd v. Coca Cola Bottling Co. (the case about the cigar stub in a Coca Cola bottle). At T2, plaintiff Jones sues defendant Coca Cola Bottling Co. in the Tennessee trial court, alleging that she was injured when the unopened bottle of Coca Cole in her hands exploded, cutting her face and hands with shards of flying glass. Her theory is that a defect in the glass bottle that the bottling company should have detected, and/or over-pressurization of the bottle at the bottling company, caused the bottle to explode. Plaintiff Jones bought the Coca Cola from a retail store, not directly from the defendant.
Discussion
Can the holding in Boyd in T1 be interpreted in such way that it controls the question of law in T2?Can the holding in Boyd in T1 be interpreted in such way that it does not control the question of law in T2?- The holding in Boyd in T1 is “precedent” whether or not it controls (is conclusive of) the issue in T2. This is because Boyd in T1 has reason-giving power to our issue in T2.