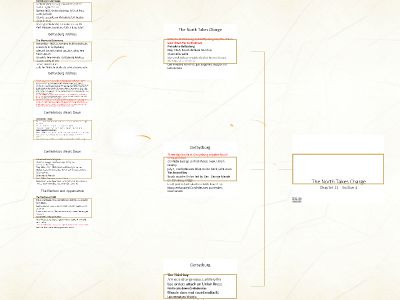 The North Takes ChargeChapter 11–Section 4
Mitten–CSHSAMAZ HistorySemester One
The North Takes Charge
Victories at Vicksburg and Gettysburg help the Union wear down the ConfederacyPrelude to GettysburgMay 1863, South defeats North at ChancellorsvilleStonewall Jackson mistakenly shot by own troopsdies 8 days later of pneumoniaLee invades North to get supplies, support of Democrats
Gettysburg
Three-day battle at Gettysburg cripples Southturning point of warConfederates go to find shoes; meet Union cavalryJuly 1, Confederates drive Union back, take townThe Second DaySouth attacks Union led by Gen. George Meade on Cemetery RidgeNorth pushes back attacks on Little Round TopMany exhausted Confederates surrender;Union line holds
Gettysburg
The Third DayArmies exchange vicious artillery fireLee orders attack on Union lines;North cuts down ConfederatesMeade does not counterattack;Lee retreats to Virginiastaggering losses on both sides
Grant Wins at Vicksburg
Vicksburg Under SiegeConfederate Vicksburg prevents Union from controlling MississippiSpring 1863, Union destroys MS rail lines, sacks JacksonGrant’s assaults on Vicksburg fail, begins siege in MayStarving Confederates surrender on July 4thPort Hudson, Louisiana falls 5 days later;Confederacy completely divided
Gettysburg Address
The Memorial CeremonyNovember 1863, ceremony held to dedicate cemetery in GettysburgEdward Everett, noted speaker, gives two hour speechLincoln’s two-minute Gettysburg Address asserts unity of U.S.honors dead soldierscalls for living to dedicate selves to preserve Union, freedom
Gettysburg Address
Four score and seven years ago our fathers brought forth on this continent, a new nation, conceived in Liberty, and dedicated to the proposition that all men are created equal.Now we are engaged in a great civil war, testing whether that nation, or any nation so conceived and so dedicated, can long endure. We are met on a great battle-field of that war. We have come to dedicate a portion of that field, as a final resting place for those who here gave their lives that that nation might live. It is altogether fitting and proper that we should do this.But, in a larger sense, we can not dedicate -- we can not consecrate -- we can not hallow -- this ground. The brave men, living and dead, who struggled here, have consecrated it, far above our poor power to add or detract.The world will little note, nor long remember what we say here, but it can never forget what they did here.It is for us the living, rather, to be dedicated here to the unfinished work which they who fought here have thus far so nobly advanced.It is rather for us to be here dedicated to the great task remaining before us -- that from these honored dead we take increased devotion to that cause for which they gave the last full measure of devotion -- that we here highly resolve that these dead shall not have died in vain -- that this nation, under God, shall have a new birth of freedom -- and that government of the people, by the people, for the people, shall not perish from the earth.
Confederacy Wears Down
Confederate MoraleSouth unable to attack; last hope is undermine moral of North, get armisticeCivilian morale plummets; public calls for peaceDiscord within government keeps Davis from governing effectivelyGrant Appoints ShermanMarch 1864, Lincoln appoints Grant commander of all Union armiesGrant appoints William Tecumseh Sherman commander of Mississippi divisionGrant, Sherman believe in total war to destroy South’s will to fight
Confederacy Wears Down
Grant and Lee in VirginiaGrant’s strategy; keep Lee busy in VirginiaSherman raids GeorgiaMay 1864 – April 1865; Grant and Lee fight battlesHeavy losses on both sides; North can replace soldiers, South cannotSherman’s MarchSept. 1864, Sherman burns AtlantaDecember, takes Savannah, turns North to help Grant – inflicts even more destruction on So. Carolina
The Election and Appomattox
The Election of 1864Democrats want immediate armistice, nominate McClellanRadical Republicans – harsh conditions for readmission to UnionLincoln pessimistic; Northern victories, troops’ votes give him winSurrender at AppomattoxAfter Petersburg, Davis’s government leaves Richmond, sets it afireLee surrenders April 1865 at village of Appomattox Court HouseLee’s soldiers paroled on generous terms