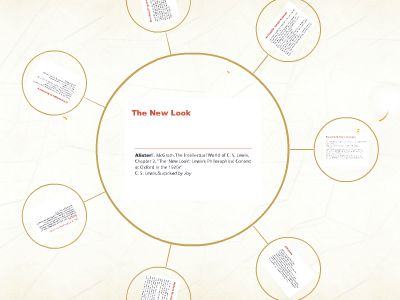 The New Look
AlisterE. McGrath,The Intellectual World of C. S. Lewis, Chapter 2, “The ‘New Look’: Lewis’s Philosophical Context at Oxford in the 1920s”C. S. Lewis,Surprised by Joy
Post-World War I Changes
Positive views on human nature and cultural progress were questioned.Sigmund Freud wrote about hidden psychological influences.James Joyce’sUlyssesoffered radical literary innovation.Karl Barth’s theology rejected late nineteenth-century Liberal Protestantism.A longing for authority gave credibility to totalitarian political movements such as Nazism and Communism.
Atheism
God was a human fabrication.Lewis identified with Lucretius:“Had God designed the world, it would not beA world so frail and faulty as we see.”There is too much misery for there to be a God.However, this atheism is unproductive and uninteresting: “Nearly all that I loved I believed to be imaginary; nearly all that I believed to be real I thought grim and meaningless” (Surprised by Joy, Chapter IX, “Check,” 170).
Oxford Realism
T. H. Green, G. E. Moore, Bertrand Russell, John Cook Wilson, E. F.Carritt, Horace Joseph, and Harold PrichardRealism focused on the objective world around us, almost becoming materialism.Objects of knowledge are independent of the act of knowing.Oxford Realism affirms the validity of certain aesthetic and moral ideas, but without a theory of knowledge that prevented these ideas from mere subjectivism.There is some “first principle” embedded in the universe and human reason that allows us to reason correctly.Lewis attempted to limit reality to the intellectually controllable so as to maintain personal autonomy.
Feb. 3, 1930 Letter to Owen Barfield
“The ‘Spirit’ or ‘Real I’ is showing an alarming tendency to become much more personal and is taking the offensive, and behaving just like God. You’d better come on Monday at the latest or I may have entered a monastery.”Lewis becomes a Christian, probably some time during the first ten days of June, 1930.
Chronological Snobbery
In the early 1920s, Lewis saw mythology as “the recognized scientific account of the growth of religion.”Definition: later is better (Dorsett, p. 39)Later, “all that is not eternal is eternally out of date” (The Four Loves, 1960)The “New Look” was a transient moment.Our situation is not intrinsically superior to all other periods of history.
The New Psychology
How reliable are our intuitions?Freud: everything desirable is mere wish-fulfillment.“You must ask them whether any reasoning is valid or not. If they say no, then their own doctrines, being reached by reasoning, fall to the ground. If they say yes, then they will have to examine your arguments and refute them on their merits: for is some reasoning is valid, for all they know, your bit of reasoning may be one of the valid bits” (The Pilgrim’s Regress).
Scientific Reductionism
The resolve to “believe in nothing but atoms and evolution” (Surprised by Joy, 174).“Darwin and Spencer undermining ancestral beliefs stand themselves on a foundation of sand: of gigantic and irreconcilable contradictions an inch below the surface” (Aug. 14, 1925 letter to his father).Science defied vs. science deifiedBertrand Russell: “Whatever knowledge is attainable, must be attained by scientific methods; and what science cannot discover, mankind cannot know.”Lewis, “The Funeral of a Great Myth”—scientific theories about evolution have been hijacked by social and cultural agendas.