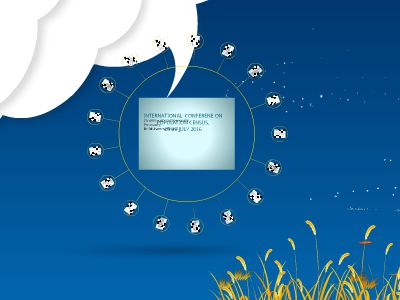 INTERNATIONAL CONFERENE ON POPULATION CENSUS,25-26 JULY 2016
CENSUSAND TECHNOLOGYPresentedbyDr. Muhammad Hanif
1
INTRODUCTION
Thepopulation and housing census is vitalfor providinginformation about the population in order to present a full and reliable picture of the population in the country in terms of its size and spatial distribution, its demographic, social and economic characteristics, as well as its housing conditions. The census is the source for detailed information on the population at the level of small areas and small population groups.
2
Cont….
Thecensus provides essential information for policy development and planning, for managing and evaluating programme activities across a broad range ofsectoralapplications, and for monitoring overall development progress. As a source for evidence-based decision making, census data have many uses, including in the demarcation of constituencies and the allocation of representation on governing bodies.
3
Cont….
Censusdata also play an indispensable role in ensuring equitable allocation of national funds and services. The census also provides data for the calculation of social indicators, particularly those that are needed for small areas or small population groups as well as those that may be observed infrequently in the population.
4
Technology
This could be described as a set of tools both hardware (physical) and software (algorithms, philosophical systems, or procedures) that help us to act and think better. Technology includes all the objects from basic pencil and paper to the latest electronic gadget.The use of technology has been evolving over previous rounds of censuses. The advent of computers and software has transformed data processing, analysis, presentation, storage and communication.
5
Cont…
There has been an increasing use of interactive databases with web-base and GIS applications. Websites, warehousing, archiving, database and spatial analysis software such as: Web-based, GIS and database software etc., has facilitated data exchange, data repository, analysis and better understanding of census results. However, despite these achievements, there is need to further improve access to data.
6
Cont…
Innovations in internet and mobile-based sharing technological tools have also brought information to the door steps of many through the social media such as social networking websites, blogging, twitter, SMS. These tools allow groups or individuals to generate content and engage in peer-to-peer conversations and exchange of content. This opens-up new possibilities for dissemination; particularly when they are integrated in interactive databases
7
Cont….
Atpresent a number of organizations are attempting to help bring innovation to census and statistical operations. Among the concerns regarding new technology are these:How to choose appropriatetechnology?How to maintain the integrity of existing statisticalsystems?How to deal with outsourcing certaintasksand how to maintain confidentiality ofdata?
8
Important technologies
Someimportant technologies, such as:CAPI (Computer Assisted Portable Interview),Computer Assisted telephone interviewing (CATI)Census mappingGeographic information system (GIS) andData-processing software for census can be used to reducelabour, cost and time involved population and housing census.
9
Computer Assisted Portable Interview
ComputerAssisted Personal Interviewing (CAPI) involves the use of a portable computer to collect, store and transmit data related to a personal survey interview. It is hoped that the information shared in this presentation provides key insight for those national statistical offices that may be considering using CAPI as an alternative method for data collection
10
Cont….
UnitedStates of America, Australia, Canada, New Zealand and Oman had experimented with CAPI in the administering of surveys. Their experiences reported three common benefits in survey operations:Betterdata qualityImproved timelinessCost effectiveness
11
Computer Assisted telephone interviewing
ComputerAssisted telephone interviewing (CATI) system is combination of computer and telephone system, its main functions are providing:Questionnairecontent enquiries from house-holds;Verificationof identity of enumerators ;On-linedata entry and real time data validation;
12
Cont….
Reservationof enumeration / scheduling for interviews by house-holds;Callerscan leave a message in non-office hour;Conversationrecording;Conversationplay back and message play back;SendSMS messages feature can be added.
13
Pencil and Paper Interviewing
Penciland Paper Interviewing (PAPI) has been remained an effective method of collecting data in field surveys but CAPI, however, had the capacity to increase the quality and efficiency of data collectionand processing.
14
Census data mapping
Many users with different technical abilities are using Census data to ensure local services are being commissioned in the most cost-effective way. That means Census data mapping requires software that is straightforward to work with and at the same time produces reports that are easy to understand.
15
Instant Atlas
Instant Atlas is now being used by a number of organizations in the UK to present Census data in a visual format. Many have already updated their websites to include the first release of the 2011 Census data which was recently made available online and in tables through the Office for National Statistics.
16
Recommendations
It has been realized that interactive nature of approaches and technological tools foster better understanding of census data and information through user/producer communication or exchanges.Along with the teachers, the local scholars may also be employed (most of them having their own laptops).In these days the computer experts are also available in schools, union councils and basic health units.
17
.
Thank You
18