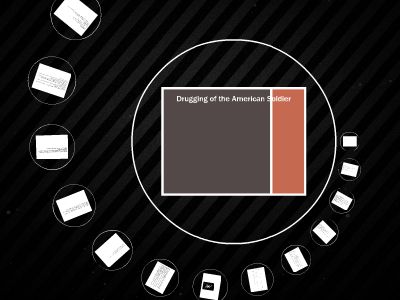 Drugging of the American Soldier - _.com

PTSD and Medication Spellbinding
Drugging of the American Soldier
What is PTSD?How Big of a Problem is It?What is Medication Spellbinding?What are the Alternatives to Drugging?Resources
Agenda
Post TraumaticStress Disorder (PTSD) can occur after you have been through a traumatic event. A traumatic event is something terrible and scary that you see, hear about, or that happens to you, like:•Combatexposure (aka, Shell Shock and Combat Fatigue)•Child sexual or physical abuse•Terrorist attack•Sexual or physical assault•Serious accidents, like a car wreck•Natural disasters, like a fire, tornado, hurricane, flood, or earthquake
What isptsd?
Thereare four types of symptomsof PTSD:1. Relivingthe event (also called re-experiencing symptoms)You may have bad memories or nightmares. You even may feel like you're going through the event again. This is called a flashback.2. Avoidingsituations that remind you of the eventYou may try to avoid situations or people that trigger memories of the traumatic event. You may even avoid talking or thinking about the event.3. Negativechanges in beliefs and feelingsThe way you think about yourself and others may change because of the trauma. You may feel fear, guilt, or shame. Or, you may not be interested in activities you used to enjoy. This is another way to avoid memories.4. Feelingkeyed up (also calledhyperarousal)You may be jittery, or always alert and on the lookout for danger. Or, you may have trouble concentrating or sleeping. This is known ashyperarousal.USDepartment of VeteransAffairshttp://www.ptsd.va.gov/public/PTSD-overview/basics/what-is-ptsd.asp
Symptoms ofptsd
Experts think PTSD occurs:•In about 11-20% of Veterans of the Iraq and Afghanistan wars (Operations Iraqi and EnduringFreedom).•In as many as 10% of Gulf War (Desert Storm)Veterans.•In about 30% of VietnamVeterans.US Department ofVeterans Affairshttp://www.ptsd.va.gov/public/PTSD-overview/basics/how-common-is-ptsd.asp
How Big of a Problem is It?
Here are some facts (based on the U.S.):•About 7 or 8 out of every 100 people (or 7-8% of the population) will have PTSD at some point in their lives.•About 5.2 million adults have PTSD during a given year. This is only a small portion of those who have gone through a trauma.•Women are more likely than men to develop PTSD. About 10% of women develop PTSD sometime in their lives compared with 5% of men.US Department of Veterans Affairshttp://www.ptsd.va.gov/public/PTSD-overview/basics/how-common-is-ptsd.asp
General Prevalence
Another cause of PTSD in the military can be military sexual trauma (MST). This is any sexual harassment or sexual assault that occurs while you are in the military. MST can happen to both men and women and can occur during peacetime, training, or war.AmongVeterans who use VA health care, about:•23 out of 100 women (or 23%) reported sexual assault when in the military.•55 out of 100 women (or 55%) and 38 out of 100 men (or 38%) have experienced sexual harassment when in the military.US Department of Veterans Affairshttp://www.ptsd.va.gov/public/PTSD-overview/basics/how-common-is-ptsd.asp
MST and PTSD
A real problem or just an excuse?
Medication Spellbinding (intoxicationanosognosia) is the failure to recognize the harmful mental effects of psychoactive agents and the accompanying tendency to overestimate the positive mental effects.Individuals fail to perceive they are acting in an irrational, uncharacteristic, and dangerous manner.They fail to identify the medication playing any role in their drastically changed mental processes and activities.They often this the medication is helping, although sometimes believe it is ineffective, and they continue to take it as they deteriorate mentally.In extreme cases, individuals become compulsively driven to perpetrate out-of-character violence against themselves or others.Breggin, P. (2006). Intoxicationanosognosia: The spellbinding effect of psychiatric drugs. Ethical Human Psychology and Psychiatry, 8(3), 201-215.
What is Medication spellbinding
Cognitive Behavioral Therapy (CBT)Eye Movement Desensitization Reprogramming (EMDR)Hypnosis and other Mind-Body treatments
Alternatives to drugging
CBT has been a standard therapy for many decades and probably has the most extensive research base to recommend its use.CBT looks at ways to change thinking and behavior to deal with trauma.CBT commonly uses cognitive “flooding” to deal with trauma.
Cognitive Behavioral Therapy (CBT)
Eye Movement Desensitization Reprocessing (EMDR) uses CBT and eye movement (as well as tapping and other forms of attention splitting) to help deal with trauma.EMDR has a research base that recommends its use.
EMDR
Hypnosis is a mind-body modality that may be used in conjunction with standard CBT or with EMDR.Hypnosis has a considerable research base for treatment of PTSD that recommends its use.A hypnosis protocol may also include diaphragmatic breathing, mindfulness meditation, and EMDR-type interventions, all of which have support in the stress treatment literature.Depending on the provider, CBT may also be used in conjunction with the above measures.
Hypnosis/mind-body treatments
INFORMATIONDr. Peter Breggin–www.breggin.comDr. William Glasser–www.glasser.comhttp://Scholar.Google.comTREATMENTDr. Ron Mottern–www.MotternInstitute.comCapt. RonEslinger(USN-Ret)–www.HealthyVisionsHypnosis.com
Resources