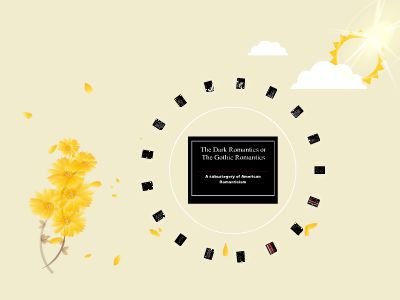 The Dark Romantics or The Gothic Romantics - scott.k12.ky.us

The Dark Romantics orThe Gothic Romantics
A subcategory of American Romanticism
Comparing Literature Ages
Remember….Each successive age is a reaction to the previous one.Each previous age fails to see the achievement of the successive age.Using the chart on the next slide, explain how Rationalists reacted to Puritanism.
Comparing Literature Ages
Puritanism
Rationalism
Faith Reason
Authority Skeptics
Theology Science
Predestined Humanity Self-made Humanity
The Romantic response to the Rationalists and Industrialization…
Over-crowdingUrbanizationFactory life/workPovertyHow do you think the Romantics would respond to these issues in their stories?
Comparing Literature Ages
Puritanism
Rationalism
Faith ReasonExtreme Emotions, Insanity
Authority SkepticismMystery, Suspense
Theology ScienceSupernatural, Occult Legends, Dreams, Wild Nature
Predestined Self-madeFate, Curses, Humanity Humanity Omens
Romanticism
Beliefs of the Dark Romantics
Dark Romantics are much less confident about the notion that perfection or idealism is an innate quality of mankind.Presents individuals as prone to sin and self destruction, not as inherently possessing divinity and wisdom.Frequently show individuals failing in their attempts to make changes for the better.
Beliefs of the Dark Romantics
4.Romantics and Dark Romantics both believe that nature is a deeply spiritual force; however, Dark Romanticism views nature as sinister and evil.5.When nature does reveal truth to man, its revelations are pessimistic and soul-crushing.
CHARACTERISTICS OF DARK ROMANTICISM AND GOTHIC LITERATURE
1. Importance of Setting
The setting is greatly influential in Gothic stories. It not only evokes the atmosphere of horror and dread, but also portrays the deterioration of its world.The decaying, ruined scenery implies that at one time there was a thriving world. At one time the abbey, castle, mansion, or landscape was something treasured and appreciated.Now, all that lasts is the decaying shell of a once thriving dwelling.
2. An Atmosphere of Mystery and Suspense
Works are permeated by a threatening feeling, a fear enhanced by the unknown.Often the plot itself is built around a mystery, such as unknown parentage, a disappearance, or some other inexplicable event.
3. Omens, Portents, Visions
A character may have a disturbing dream, vision, or some phenomenon may be seen as a portent of coming events.For example, if the statue of the lord of the manor falls over, it may portend his death.Portent:A sign or warning that something, esp. something momentous or calamitous, is likely to happen.
4. Supernatural or Otherwise Inexplicable Events
Dramatic, amazing events occur, such as ghosts or giants walking, or inanimate objects (such as a suit of armor or painting) coming to lifeIn some works, the events are ultimately given a natural explanation, while in others, the events are truly supernatural.
5. High, Even Overwrought Emotion
The narration may be highly sentimental, and the characters are often overcome by anger, sorrow, surprise, and especially terror.Characters suffer from raw nerves and a feeling of impending doom.Crying and emotional speeches are frequent.Breathlessness and panic are common.
Abbreviated Dark Romanticism Characteristics
Settingis in bleak or remote placesPlotinvolves morbid or violent incidentsCharactersare in psychological and/or physical tormentAsupernaturalor otherworldlyelementis often present
Abbreviated Dark Romanticism Characteristics
VerypessimisticIndividuals are prone tosinandself-destructionNatureis dark, sinister, and mysterious; man isflawed
Dark Romantic Heroes
ConflictedLonerMisunderstood by societySpiritualTalented or gifted in some wayInspired by creativity and imagination rather than society norms
Elements of Dark Romanticism
Drafty, old, family houses/castlesMystery and suspense, finding dark secretsSupernatural: ghosts, curses, monsters, etc.Grisly death and gruesome murderOmens, curses, dreams, legendsExtreme emotions of grief, passion, loveInstances of madness and insanityReferences wild, dangerous natureMood: creepy, doom and gloom, terror
Edgar Allan Poe Biography
Directions:Read Edgar Allan Poe’s biography on pages 450-453.Under each heading, list two main ideas from that section. (Five headings = 10 facts) Make sure you label each heading,thenlist the two facts underneath the heading.After you finish answer, explain how Poe’s life influenced his writing. How did his life fate him to become a Dark Romantic writer?

Make amazing presentation for free
The Dark Romantics or The Gothic Romantics - scott.k12.ky.us