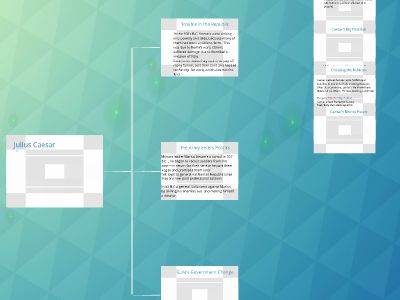 The Fall of the Republic - dvusd.org

Julius Caesar
Trouble in the Republic
In the 100’s B.C. farmers were sinking into poverty and debt, because many of them had been unable to farm. This was due to Rome’s wars. Others suffered damage due to Hannibal’s invasion of Italy.Faced with debts they could not pay off many famers sold their land and headed to the city for work, which was hard to find.
The Army enters Politics
Military leader Marius became a consul in 107 B.C. , he began to recruit soldiers from the poor—in return for their service he paid them wages and promised them landFelt loyal to general not Roman Republic since they are now paid professional soldiersIn 82 B.C a general Sulla went against Marius by driving his enemies out and making himself a dictator
Sulla’s Government Change
Julius Caesar
In 60 B.C. Julius Caesar, Pompey, and Crassus formed the First Triumvirate to rule Rome (a political alliance of 3 people)
Caesar’s Big Decision
What would you do?
Crossing the Rubicon
Caesar decides to hold onto 5,000 loyal soldiers, & march to Italy crossing Rubicon (river at a command center). He knew there would be no return. He was starting a civil war.Pompey tried to stop Caesar.Caesar drove Pompey’s forcesfrom Italy then destroyed hisarmy in Greece in 48 B.C.
Caesar’s Rise to Power

Make amazing presentation for free
The Fall of the Republic - dvusd.org