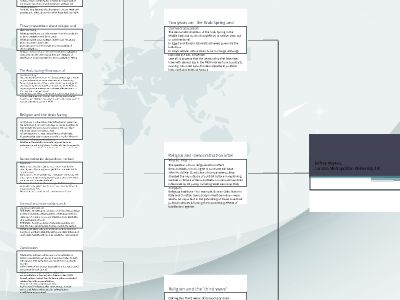 Religion, democratisation and the Arab Spring

Religion, democratisation and the Arab Spring
Jeffrey Haynes,London Metropolitan University, UK
1
Two years on: the Arab Spring and democratisation
The democratic direction of the Arab Spring in the Middle East and North Africa (MENA) is neither clear cut or unidirectional.In Egypt and Tunisia, Islamists achieved power via the ballot boxIn Libya, secular actors claim to be in charge, although Islamists are also influentialOverall, it appears that the relationship that Islamists have with democracy in the MENA varies from country to country, informed by both internal (cultural, political, historical) and external factors.
2
Religion and democratisation after World War II
The question of how religious actors affect democratisation is a long-term controversial issue.After World War II, scholars of comparative politics stressed the importance of political culture in explaining success or failure of democratisation in various countries influenced by US policy, including West Germany, Italy and Japan.Religious traditions – for example, Roman Catholicism in Italy and Christian Democracy in West Germany – were said to be important in the (re)making of those countries’ political cultures following the traumatising effects of totalitarian regimes.
3
Religion and the ‘third wave’
During the ‘third wave of democracy’ (mid-1970s–mid-1990s), much attention was paid to the role of religion in democratisation.For example, in Poland, Polish pope, John Paul II, played key role in undermining existing communist government and, along with civil society, pivotal in helping establish democratic rule.During 1980s and 1990s, widespread religious deprivatisation affected much of the world.
4
Specific claims about religion and democratisation
Huntington: some religions more amenable to democracy than others.Linz/Stepan: religion not that important to democratic outcomes in E. Europe after communism.Halliday: Islam not key factor in MENA to explain lack of democracy: barriers primarily social and political, not religious, factors.In MENA, long histories of authoritarian rule and weak civil societies and, although some or all of those features might be legitimised by the state in terms of ‘Islamic doctrine’, nothing specifically ‘Islamic’ about them.
5
Three propositions about religion and democracy
Religious traditions: core elementsmoreorlessconducive to democratisation and democracy;Religious traditions are always multi-vocal. Yet, at any given moment voices in the ascendancymoreorlessreceptive to/encouraging of democratisation;Religious actorsrarely if everdeterminedemocratisation outcomes. On the other hand, they are regularly of significance in various ways for democratisation, with a range of outcomes. This may especially be the case in countries that have long traditions of secularisation, e.g., Turkey.
6
The Arab Spring=New wave of democracy?
Not since end of communism in E. Europe 20 years ago is role of religion in democratisation so prominent as in Arab Spring.Yet, a simple question – ‘What is to be the political outcome of the Arab Spring for the Arab/Muslim countries of the MENA, a region largely untouched by the third wave of democracy? – is not likely to elicit a clear answer.Another question: ‘What is the role of religion in these events?’, is also not conducive to a simple or short satisfactory response.It seems clear, however, that so far religion is not pivotal actor in relation to democratisation in MENA.
7
Religion and the Arab Spring
In Egypt and Tunisia, where Islamists achieved power via the ballot box, it did not imply clear or simple transition to Islamic state (egIran or Saudi Arabia) or even an ‘Islam-influenced’ government (egTurkey).In both Egypt and Tunisia, several ‘kinds’ of Islamists, illustrating that ‘Islam’ doesnotprovide a singular blueprint forhow to ruleonce power achieved.Whether authentically democratic regimes become ensconced or not in Egypt and Tunisia, etc, would appear to have little to do with the fact that both are strongly Muslim countries.
8
Democratisation depends on various factors
Material considerations seems much more important for stability, security and regime longevity than the extent of its ‘religious-ness’.Key questions: To what extent can new governments deal with pressing challenges from fast-growing populations who want more jobs and improved welfare?To people who want beneficial changes NOW the religious complexion of a government is much less important than its broad-based abilities.Evidence for this comes from Turkey, where an Islam-influenced government has, since 2002, presided over sustained economic growth, with beneficial ramifications in terms of jobs, welfare, security – and votes.
9
Internal and external factors & democratisation
INTERNAL: Strength and cohesion of civil society, political society (including political parties), religious and ethnic make up of country, economic situation and plausibility of broad-based reforms.EXTERNAL: Foreign policies of interested parties, e.g., USA, EU, Iran, Saudi Arabia, Turkey, muddy the waters.MENA most likely outcome: Slide into entrenched and long-term political instability, with some state failure and much state fragility with serious results for regional and international instability.
10
Conclusion
Relationship between religion and democratisation in MENA in context of Arab Spring is complex, linked to both internal and external factors, and varies from country to country.Is third wave of democracy, especially in E. Europe, a useful comparison to Arab Spring?Religious actorsmaybe pivotal in relation to democratisation outcomes, as in Poland in late 1980s.Overall, religious actors tend to have a rather ambivalent relationship with democratisation.They are not necessarily recognised as legitimatepoliticalactors after revolution,eg, in post-communist Poland where secular political actors quicklybecame prominent.
11