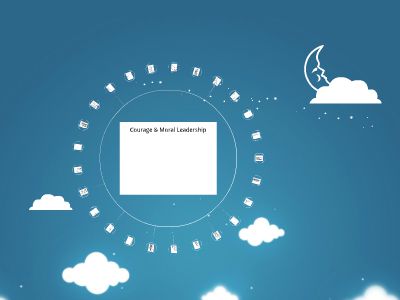 Courage & Moral Leadership
Moral Background Issues
Too easy to focus on bad examples. We know what they are. Instead:Focus on ‘good’ examples.Focus on ‘maybe’ examples.Why are leaders more highly scrutinized?Outcomes associated with lapses:Difficult to attract & retain quality people.Morale, commitment & performance decrease.
Moral Background Issues
“The most dangerous obstacles for leaders are personal weakness and self-interest rather than full-scale corruption.” (Daft, 2008, p.165)How do we see this play out in sports?Exercise?
Leader Behaviors
A leader’s behavior shows what s/he values and that message is then relayed to followers.Bad behaviors:Preoccupied with yourself.Hoard success.Hoard status symbols.Silence against the masses.
Compare: Unethical vs. Ethical
Unethical
Arrogant & Self-servingExcessively promotes self-interestDeceptiveBreaches agreementsDeals unfairlyShifts blame to othersDiminishes other’s dignityNeglects follower developmentWithholds help & supportSilence against the masses
Ethical
Possesses humilityMaintains concern for greater goodHonest & trustworthyFulfills commitmentsStrives for fairnessTakes responsibilityShows respect for individualsEncourages & develops followersServes othersStands up for what is right
Act Like a Moral Leader
“The single most important factor in ethical decision making in organizations is whether leaders show a commitment to ethics in their talk and especially their behavior” (Daft, 2008, p. 167)Values make the basis for our decisions.In sport & exercise level of participants or competition is paramount.
Troubles in Sport…
Open door policies W/O repercussions.Establish clear ethic codes.Rewarding ethical behavior.Zero tolerance for violations.100-0 score…
Jeffrey Swartz
Humanity, Humility, Integrity, Excellence.4 Core values of his company40 hours / year paid leave to volunteer.Who is on the Bus?Some empirical support for companies run on moral principles success.Mom & PopIn sport…?
Becoming a Moral Leader
Acts, decisions, behaviors are NOT inherently good or evil, they are neutral.Moral leadership:Distinguish right from wrong AND doing right.Seek the just, honest, good, proper avenue to do right.Uplifts followers to be better than they otherwise would have been.Even when we can’tchoosewhat to do, we canchooseHOW to do it.
3 Levels of Personal Moral Development
Servant Leadership
Servant leadership broadly defined: encouraging followers to fully develop their potential and promote the follower-to-leader change.How do we do this in sport? Exercise?Non-compete clauses.
Changing Leader Focus
Control centered in the leader
Control centered in the follower
Whole employees
Stage 2: Participation
Stage 3:Empowerment
Stage 4: Service
Self-responsible
Team Players
Stage 1: Control
Servant
Obedient
Authoritarian
Participative
Stewardship
Authoritarian Management
Leaders are good managers that direct & control their followers.Followers are obedient and submit to taking direction.Power, purpose, privilege top-down.Leaders set strategy, rewards & path-goals.Standardization, numbers, analysis, routines.
Participative Management
Employee suggestion programs, participation groups, quality circles.70% adoption, but…Top-down.Leaders expect quality ideas to go up the ladder but don’t bring them yourself!Good idea, failed execution.
Stewardship
Followers empowered to make decisions and assume control over HOW they do their jobs.“Supports the belief that leaders are deeply accountable to others as well as to the organization, without trying to control others, define meaning and purpose for others, or take care of others.” (Daft, 2008, p. 175)
Principles of Stewardship
Reorient toward a partnership.Control shifts away from leaders. Ability to say NO. Honest, open, responsible for vision & purpose, accountable.Localize decisions and power to those closest to the work and the customer.Point of attack people have a voice that is heard and actions follow their suggestions.
Principles of Stewardship
Recognize and reward the value of labor.Rewards are distributed on basis of success as group as a whole.Maximum rewards given across the board.Expect core work teams to build the organization.Front-liners define goals, maintain controls, create a nurturing environment, and organize & reorganize themselves in response to the marketplace.
Servant Leadership
Servant leadership can be described as being ‘upside-down’.Servant Leaders:Transcend self-interest to serve needs of others.Help others grow and develop.Provide opportunity for others to gain materially and emotionally.Top priority: service toothers.
Greenleaf’s Servant Leadership Model
1: put service before self-interest.Helping others takes precedence over achieving formal leadership, attaining power or control.Do what is right regardless of financial rewards.2: Listen first to affirm others.Ask questions in order to listen and fully understand problems of others & show your confidence in their thoughts, opinions, answers.Use the vision of the group & further it.
Greenleaf’s Servant Leadership Model
3: Inspire trust by being trustworthy.Do what you say you will do, complete honesty, give up control, focus on the well-being of others.Must give/show trust to see it returned.4: Nourish others and help them become whole.Spirit + Mind + Body.Willing to get close to people, thus exposing potential vulnerabilities.
Leadership Courage
Courage has both moral and practical issues.“Don’t fail. Let someone else take the risk. Be careful. Don’t make mistakes.” (Daft, 2008, p. 179).Sport examples? Exercise?Courage: ability to act in the presence of fear.Darwin example.In order act with courage, you must first accept responsibility for something.
Leadership Courage
Courageous behavior often involves standing independently.Willing to take risks for a larger ethical purpose.Comfortable is the opposite of courage.This is a fear driven concept. Think of the feeling of your stomach raising up just before an important phone call, meeting, asking for a date.
Leadership Courage
Ask for what you want, say what you think.Blunt, assertive, honest, ability to say ‘No’.Abilene Paradox.Fight for what you believe in.If you believe, stand up and be counted. Pursue what it is you believe in.
Personal Courage
In order to be a courageous leader, one first must:Know yourself.Understand your strengths & weaknesses.Know what you stand for.Not be afraid of nonconformity.“True power lies in the emotions that connect people.” (Daft, 2008, p. 183)Courageous acts often include mixed emotions.
Finding Personal Courage
“We have been conditioned to follow the rules, not rock the boat, to go along with things we feel are wrong so others will like and accept us.” (Daft, 2008, p. 184)Sport? Exercise?Seek out and utilize strength from others’ support.Exercise…
Disney Said…
“It’s important to have a good hard failure when you’re young.” (as cited in Daft, 2008, p. 186).The failure isn’t the key, the response to the failure is anopportunityto do larger things.